Many SUNY campuses have rear projection facilities, usually legacy systems from decades ago. Installed at a time when rear screen technology was not what it is today and in the 4:3 aspect ratio that was the standard at the time, these RP facilities are often targeted for upgrade. The question then arises as to whether to keep the rear screen method of projection, but upgrade the infrastructure, or to convert the facility to front projection. In considering this question, it becomes necessary to examine the pros and cons of each option. 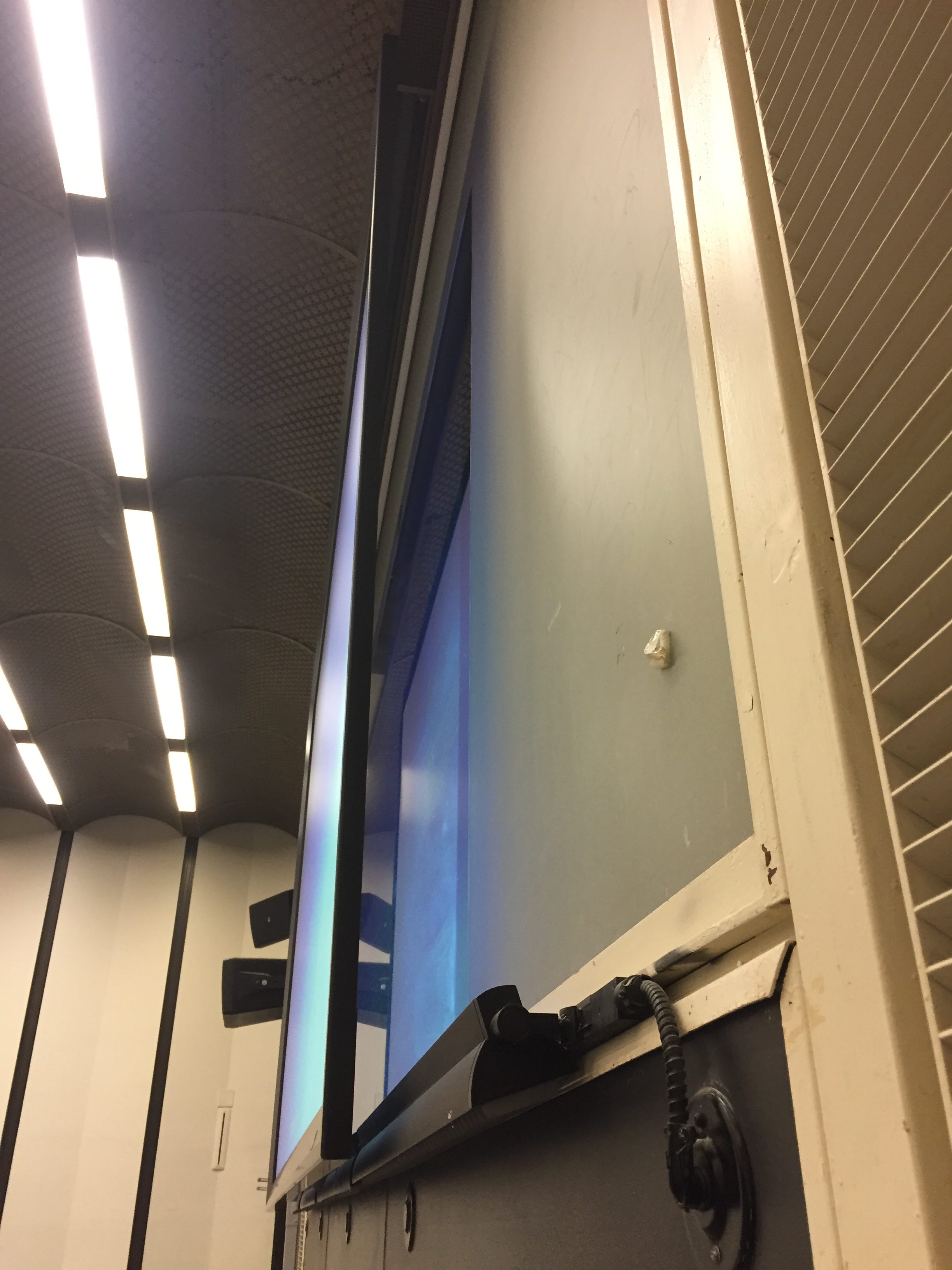 The pros of rear projection include the fact that it is not as affected by room lighting as front projection because the projector is in a separate room that is normally pitch black. Also, being in a separate room, the projector or projectors are usually easily accessible for lamp changes, other maintenance or replacement, sometimes even when class is in session in the classroom. Fan noise is also isolated from the actual classroom. Typically, wiring paths already exist, although in some cases these paths may be compromised.

The cons of rear projection include the fact that the rear projection room itself takes up a sizable chunk of valuable real estate. We all know how projectors have gotten smaller and brighter with time, so to take up all the space for a couple of LCD projectors seems a waste of space and, at least on the campuses I’ve visited, space is always at a premium. Furthermore, the screens that were installed years ago for rear projection were typically made of very thick glass that was coated on one side with a film. The thickness of the glass could have the effect of distorting and/or dimming the image. The film could get scratched, peel off or blister up in sections or simply deteriorate with age, all of which produced a sub-optimal image.

An important point to remember is that a lot of these rear projection screens were actually installed when the building they went in was under construction through the open top of the building before the roof was completed. They tend to be larger in height than any existing entryways. As such, the old screen can be cut into pieces for removal, but there’s no way to install a new screen of the same dimensions in a single piece that’s made of a rigid material. 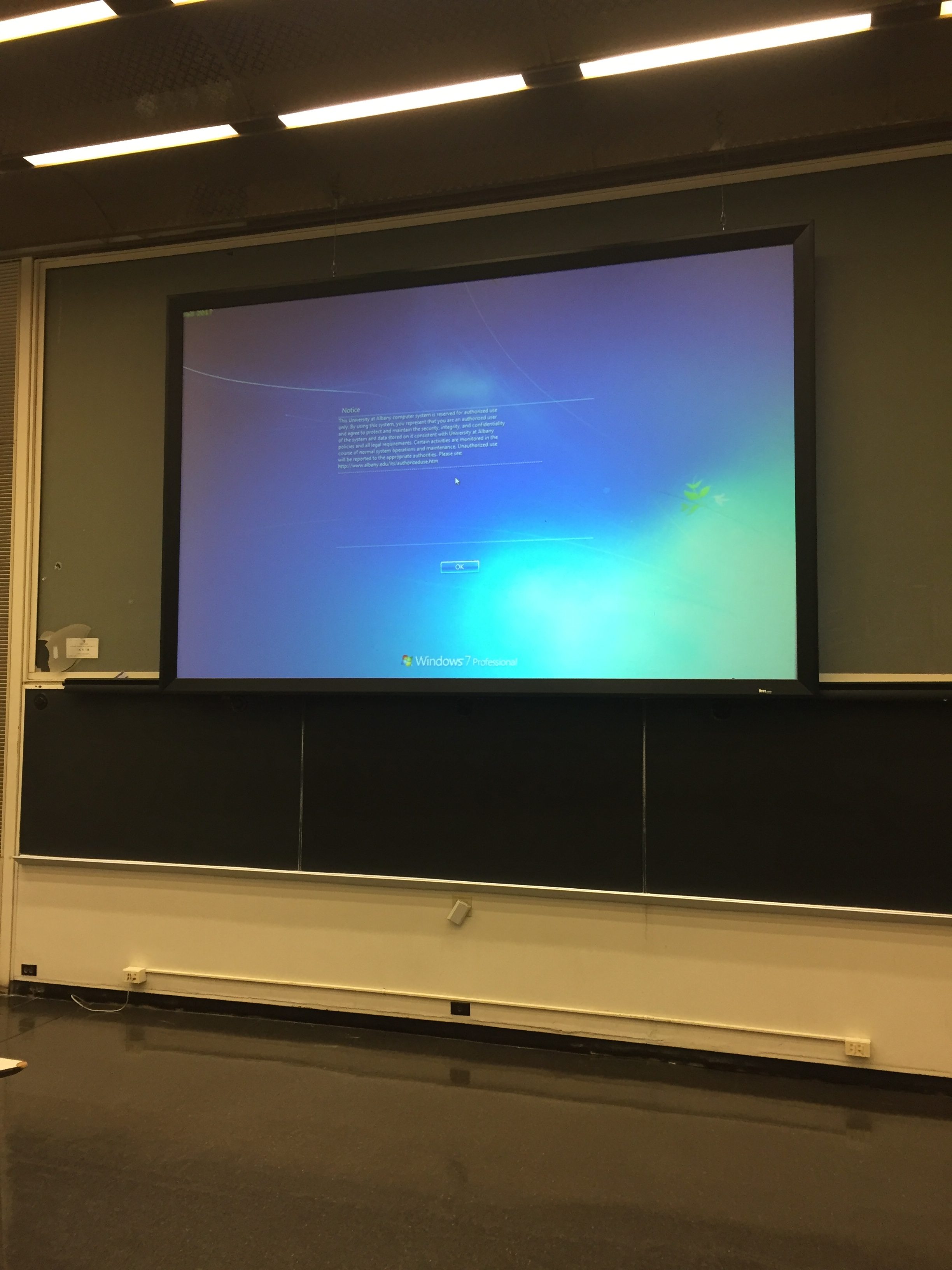 Bearing all this in mind, U Albany upgraded one of it’s rear projection lecture halls for a very unique reason and in a rather unique way. Back in the nineties, an incident in a lecture hall resulted in a golf ball-sized hole in the rear projection screen. Kyle Pulliam recently hosted Fermin and myself for an afternoon and showed us his solution to this issue (along with many other rooms). His solution was to install a framed rear projection screen that hangs from the ceiling directly in front of the original. He then scraped the rear projection film off the original screen, leaving only clear glass. By installing a projector with an ultra-short throw lens, he was able to aim  the beam through the clear glass in such a way as to narrowly miss the  hole, yet still fill the new screen.  Way to think outside the (rear projection) box, Kyle.

Would you like to submit a cool space?
It takes less than 5 minutes we promise!

What are YOU working on?

Do you have something on your bench you want to tell us about?
It takes less than 5 minutes we promise!